Firstly, may I wish you all a very Happy New Year! How was it for you? Were you nestled under a hand-crocheted bedspread, sipping home-made sloe gin whilst tucking into home-made cake, snuggled up to your beautiful man (bedecked of hand-knitted jumper and needle-felted beard) and noticing how beautiful the stars twinkled onto the years first frost, wishing you had a macro lense powerful enough to capture such ephemeral beauty? Or were you dredging the abandoned glasses of a group of people who apparently are interesting, according to your now ex-friend, yet only succeeded in making you feel insignificant, thereby necessitating the need to get as drunk as humanly possible and thereby creating the table-dancing, bra-revealing snog-monster you ultimately morphed into?
I spent it with the in-laws near Penzance, drinking Guinness and arguing the importance of The Ting Tings whilst watching Jools' 'Hootenanny'. Its all good.

Anyhoots, at long last, I've listed the monkeys I made aeons ago, and took to Wemake (then brought home again...) I wanted to share my descriptions with you: I went off on lyrical flights of fancy. Ho hum: marketing is definitely not my strong point...
I still have Alan to list, but I'll post when he's on Etsy. 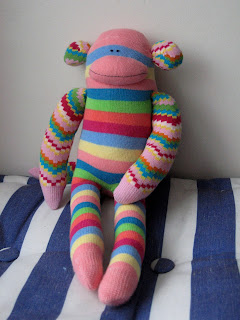 Bunty has been a teacher of PE for 10 years at a well-respected girls school, just north of West Chesterfordingshire. Her vociferous opinions on subjects such as the wearing of earrings during lessons and dealing with period pain by getting the affected girl to run around a field has endeared her to the weaker-willed members of the staffing body, whilst causing much consternation in her young charges.

Bunty is ready for a new challenge, and, considering her victory at last years 'West Chesterfordingshire Orienteering Jamboree', soundly trouncing favourite Ernie Ernster into an uneventful 3rd place, she's not wrong.
Can you provide Bunty with the thrills and fresh air she so brazenly craves? 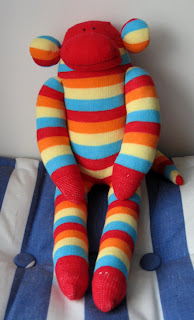 Elspeth was a model back in the 70's. She was a muse to such fashion luminaries as Ossie Clark and, later, Zandra Rhodes. A life of glamour, socialising, ill-advised tanning and string bikinis encapsulated our monkey friend, but that was all to shatter around her, when (in a similar fashion to the tv dropped from the window of the 2rd floor hotel apartment by her good friend, the late Keith Moon) she ruptured her tail during an exuberant round of Canasta.

Years of therapy followed, often punctuated by bouts of drink and drug abuse until, in the spring of 1989, she found herself in the doorway of master baker, Dave Inkles, and a love of creating yeast-engorged produce ensued.
Known for her fine cakes, crisp biscuits and majesterial scarf-wearing, Elspeth has risen to be a national treasure. Indeed, her programme, 'The Sound of Whisk on Egg' was voted 'Most Important Food-Based Programme' at last years Baftas.

Elspeth needs a new kitchen with live-in quarters:
Can you provide her with the bowls, whisks, vanilla, yeast and love she needs as she careers out of middle age? In return, she will regale you with stories of infinite glamour, plus tips on how to stop your custard from curdling.

So: what do you think?
Posted by yumptatious at 17:54 5 comments: Links to this post