Time to get fresh

As much as I may love staying in, I finally embraced the importance of getting out into the great outdoors. Feeling a gentle breeze on my face, breathing in the invigorating fresh air, striding out as far as my stumpers will allow, helps blow away the mind cobwebs that choke my lil brain.
I'm lucky enough to live in a town that's surrounded by glorious Kentish countryside (not that the nearby Sussex countryside is too shabby either.) and really don't get out into it enough, though I'm trying to redress the balance. And now is a fab time to go because spring is on the verge...

Donning my 15 year old Docs and an outfit that potentially would trigger vivid memories for a Crimewatch reconstruction (please tell me that I'm not the only one who considers these things.... O_O), off I went. 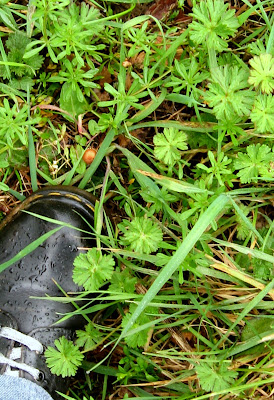 I liked the green 'flowers' in the grass (though not enough to tiptoe daintily through them, thus avoiding their imminent squishage. Seriously, you try tiptoeing daintily in Docs - it can't be done.) 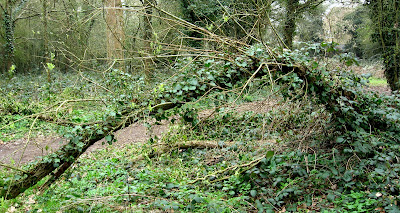 I love how this fallen, ivy-choked tree just refuses to die. I'll take another pic when it's in full leaf. 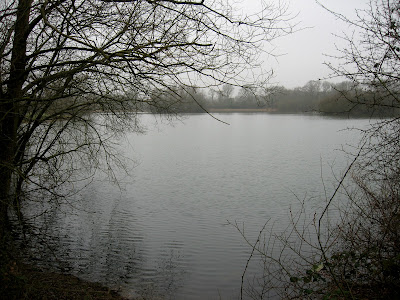 To fully appreciate this view, you should be playing this on your internal jukebox (or iPod if you want to be boring and unimaginative) 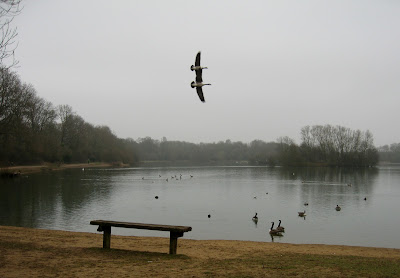 I love how the other geese are looking up at those two: "Bloody Dave and Keith - they've never been the same since watching 'Top Gun'" A beckoning bridge, wearing this season's moss adornment. It's so now...

...and comes in mustard too. 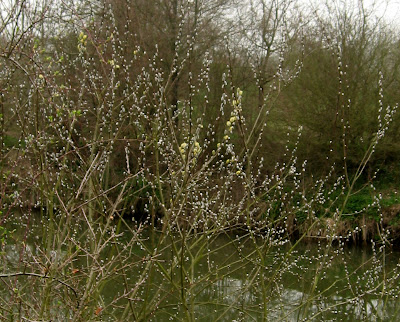 I thought these buds were like nature's own fairy lights (and no, I wasn't smoking anything...) 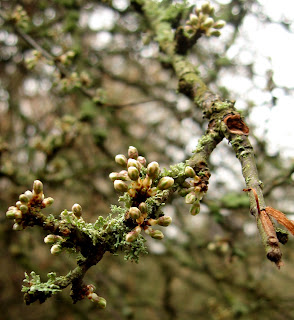 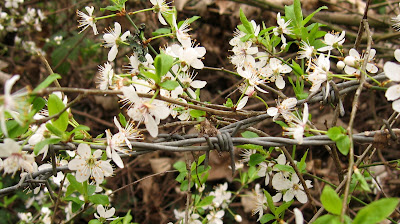 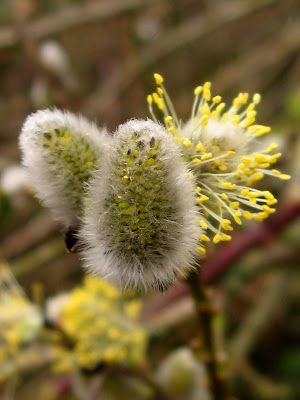 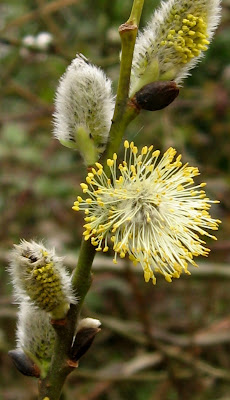 ...and catkins masquerading as either pom-poms or fireworks
I stomped for a good hour, possibly more, going down paths I'd never even noticed before let alone walked along. I love finding new things in places you feel you already know, seeing things from a different perspective and feeling just a little lost. On my travels I also saw a bumble bee big enough to put a saddle on, two magpies (joy!) and heard, but did not see, a woodpecker, presumably sending out the latest news to the woodland via morse code, or spreading delicious gossip to a nosy mob. At the end of all this, I yearned for strong fresh coffee and pancakes.
This recipe comes from Sophie Dahl's wonderful 'Miss Dahl's Voluptuous Delights' of which I have made mention before. It manages to straddle the twin channels of food memoir and recipe book but is warm and wise rather than condescending and pushy. A delightful book to dip into when you're feeling a bit ugly and hopeless. Oh and hungry, of course.
These pancakes are a little different as they use spelt flour and ricotta cheese, resulting in a satisfying yet light texture. I ate them plain, but Miss D recommends drizzling with agave or maple syrup and serving with raspberries. I had an apple later: that'll do. As I didn't have any agave (how remiss of me...) and had not managed to secure a mortgage with which to purchase maple syrup, I commonly threw in  a dessertspoonful of caster sugar: yeh, not even soft brown, or muscovado: maverick baking! Grrrr! I also made bigger pancakes than she suggested as I thought one's the 'size of a large chocolate coin' were a tad pointless, so went with tablespoon dollops instead, thus making 6 cakes 'o' pan. Plus, last change: I used a few drops of lemon extract in place of lemon rind. How very reckless of me.
Miss Dahl(ish)'s Lemon and Ricotta Pancakes
110g ricotta cheese
70ml semi-skimmed milk
1 large egg, separated
1 teaspoon lemon zest (or a few drops of lemon extract)
1 dessertspoon caster sugar (or agave or maple syrup if you're posh)
30g stoneground spelt flour
1/2 teaspoon baking powder
sunflower oil for the pan 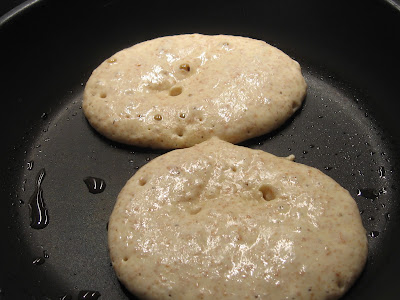 These ones are ready to be flipped over (Sorry, but the pic I took once they'd been made looked awful, but trust me: they are delicious.)
Posted by yumptatious at 19:37 3 comments: Links to this post

For the love of a hot muffin

Just a quick post to get us all back into the swing of things: how the hell have you been?! Have you lost weight?
I notice that we are down in number by 2, but at least there are still enough of us to play 20-aside football or to create a respectable flashmob or look daunting to small children if we bunch together at a local park by the swings (nonchalant sneering optional). It's far too many to play sardines in my house at least, unless we play in shifts.
I had a moment of domestic goddess madness last week where I fancied something a tad more interesting than Crunchy Nut for brekkers, and so turned to one of my favourite cookbooks, 'Spooning with Rosie' by Rosie Lovell. It's a wonderful book, celebrating the joy of sharing food and life in good company. The recipes are simple and delicious so that, should hungry chums suddenly appear on your doorstep, you'll be able to feed them well and in a relatively stress-free way. She owns Rosie's Cafe in Brixton, and a number of the recipes have been been tested on an appreciative audience. One day, I shall haul my buxom ass over there.
Anyhoots, I sleepily whipped up a batch of her marmalade muffins to a highly appreciative audience. Muffins are the perfect thing to make when you are still asleep and unable to focus as, for them to rise properly, they need to be mixed roughly, with bits still unmixed, quite slapdash and without grace. Warm, filling and luxurious thanks to the melted butter, they more than satisfied the jaded weekend palate, filling the house with comforting scents. The recipe inspired me to have a bash at creating an even more breakfasty muffin featuring a plethora of wholesome gubbins to keep the morning ticking along, and it is this creation I lay at your feet now.
Unless you have friends coming over, or a huge family, allow any spares to cool completely then freeze them. This means you can have delicious warm muffins over a number of mornings: hurrah! Feel free to use nuts and seeds to suit your own particular whimsy. Oh and by the way, the bizarre mixture of semi-skimmed milk and double cream was due to not having full fat milk: that's what I had in and I thought it would substitute well, which it did. Oh yes. Likewise using orange essential oil instead of orange zest: it's what I had in.

These are suitable for freezing: allow them to cool completely before freezing. If you like them warm, don't bother to defrost them but simply pop in the oven at 175oC for 10-15 mins. Wrap it in foil if you want the muffin to stay soft or leave it naked for a crisper top. 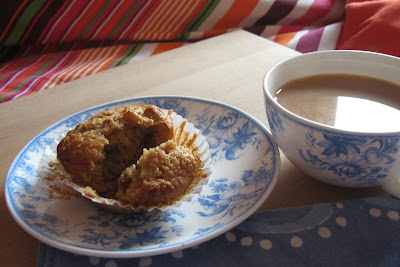 Posted by yumptatious at 18:12 4 comments: Links to this post