How Bond broke my heart 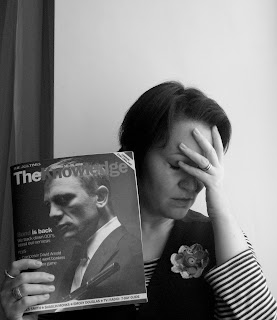 I went to see the long awaited (and considerably over-hyped) 'Quantum of Solace' last night, a little wary after mixed reviews (in both the media and from trustworthy friends) Admittedly, it had a lot to live up to after the visual feast that is 'Casino Royale', a film that simultaneously reinvented the Bond genre whilst respecting what audiences have always loved about their favourite misogynistic, alcoholic, gadget-wielding, all-action hero.
I'd read that this ('Q o S') film was 'action-packed', but this didn't prepare me for the visual diatribe that followed. It starts off with a car chase, shot so close up, I assume to drag you personally into the action, but what happens is that you lose perspective of what is going on: your brain doesn't have time to register what it's seeing. And this is the films major flaw: so many choppy shots that keeping up with what the hell is going on is futile. All these stunning locations and no time to take it all in.
It is an incredible waste of talent and missed opportunities, tying up loose ends with gaffa tape rather than a neat bow. Daniel Craig is an amazing actor, completely mesmerizing no matter what film he's in (much like Johnny Depp, Michael Caine, Kathy Bates, Judi Dench etc) yet this doesn't allow him to get any further into the Bond psyche. Ok, we know he's heartbroken, we know he wants revenge, but that's it. For the whole film. He famously performed a high quota of the stunts in this film himself and, to be honest, he needn't have bothered: the film is shot in such a way that you can't tell its him anyway.
This film is basically a Bourne film, flimsily repackaged: for what reason, I do not know. And I don't like the Bourne films: 'Oh I wish I could remember who I am but, ooh! I appear to be a weapons expert! And a kung fu master! And I can speak 87 languages fluently! And I can remember how to drive! And I bet I'm shit hot at knitting too!' Oh fuck off, Bourne, you smug git!
When I watch a Bond film, I want to see a film that's loud and proud of itself: cocksure and eager to please. It needs an emotionally-stunted central character, lots of big explosions, scantily clad, beautiful ladies (if Bond is beautiful himself, like Craig, like Brosnan, like Connery, we don't mind), ridiculous gadgets and gizmos hidden in mundane objects, crazed madmen with elaborate plans to rule the world, Aston Martins, (NOT BMW's or Fords), Saville Row tailoring, and a clear sense of its own absudity. I don't want gritty realism ('Q of S' is incredibly violent: loads of bloody punch ups and death) I want escapism, pure, shiny, simple and fun. So come on, Bond People! Sort it out! Give us what we want, plus something we'd never expect!

By the way: they should have used this theme tune:

I agree with you but daniel craig is ugly. Johnny depp isn't,. never compare them again or you will feel my wrath.

Not seen it yet, but I'm not sure I want to now. But you're right - Bond is Bond without the cheese! LMAO at the theme tune!

deb: I will just have to incur your wrath then...*assumes a battle stance*

lindsay: you might just like it - it's had very mixed reviews from love to loathe.
Bond without the cheese (and its usually a decent cheese, like Stilton for example) is Bourne.

I was never a Bond fan, hubby loves the movies, but I have always like Daniel Craig so watch Casino Royale. I thought it was a good movie, haven't heard a lot of good things about this one so I think I will wait until someone buys it when it comes out and borrow their copy :p

And I think Daniel is gorgeous, and that scene in the first Tomb Raider movie....:D

isnt ''bourne again'' coming out soon? apparently he can make good brownies too :-)

omg the word verifcation, which i usually grumble and swear my way thru, then fail, actually says MANCYS ....

Bourne free
bourne in the usa, both on betamax soon ...

omg, I loved that theme song. It made me laugh so much. :D
I went to see the Qu..the quant eh - the something of boris last week. I got dizzy in the opening scenes and every time he jumped from roof, to balcony etc, I thought ouch...ouch and ouch. Bring back the cheesy gadgets!

Please stop by my blog when you have a moment, I've left an award for you♥

I like DC as an actor (Our Friends in the North was classic) but no hunk could save the travesty that QoS is. And I love James Bond - usually.

I think whoever was responsible for the travesty of "Phantom of Boris" or whatever it's called should be shot. Or run over. Or jump off a tall building. Or be forced to act in the next Bond film. Sad, so sad, that a film that spawned all the imitators should end up being an imitator... and finally, Johnny Depp, who he?

I still haven't seen it....should I not bother :S Totally agree with you abour Bourne lmfao and they defo should have used that theme tune!! rofl

Jen: I lost patience with 'Tomb Raider', but now feel duty bound to check it out.

Raggy: 'Bourne Again'? Is that where Jason Bourne realises he was a member of the swedish supergroup Abba?! I might actually watch that! ;-)

Quirks: it is exhausting, isn't it?! We wondering whether or not to watch it again on dvd: i think we need to, in the name of fairness!

soggi: Daniel Craig is indeed a fabulous Bond: 'Casino Royale' is a wonderful, classic 007 film. BUT 'Quantum of Solace' is pants: big, uncomfortable, unsexy pants. They wasted Mr Craig in this film.