A plea from my ears 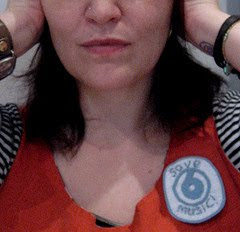 Recently, the BBC announced proposals for a series of cost-cutting and streamlining manouevres sending me into a panic not seen since Roger and Andy Taylor first left Duran Duran, the major change being the culling of the utterly marvellous 6 Music.
Why is 6 Music so important? Firstly, it doesn't patronise it's audience but brings us in to the proceedings: 'We're passionate about music and we know you lot are cos that's why you're here, so help yourself to a biccie and tell me what you think of this'. It is ageless, catering for the music-powered teen, insulted by the banality of banter on Radio 1 (until after 7pm when all the interesting DJ's come out to play, including Zane Lowe, who's particular brand of intense enthusiam some find a little unpalatable, though I personally love it) and the over-30 muso, warmed by Radio 2 but not enthused by anymore, although the fabulous Mark Radcliffe and 6 Music's Stuart Maconie are definitely worth a listen. Yes, I may be wider and more wrinklier than in the prime of my youth, but my ears are still hungry for those songs that make my heart go 'Oh...yes!' that music that make us feel truly alive. 6 Music appreciates that this is different for everyone and its DJ's, being people rather than personalities, will say if they don't like something, although they will say it respectfully and not for bitchy needs. This station has introduced me to so many new acts of utter fabulousness, as my Facebook chums will know, as I am constantly blocking their news feeds with something I have just heard and have to share. (Plus it acts as a useful bookmark me for later.) 6 Music, however, isn't just about new music: it's just about good music. It is one of the only stations, be it radio or tv for that matter, that frequently plunders the priceless BBC archives of session material, left to gather dust by blinkered dj's on the hunt for the new sound. It therefore manages to educate and enlighten whole generations of listeners who would otherwise have to receive their knowledge from restrictive sources that believe sticking Tom Jones on the main stage at Glastonbury is 'edgy' etc. It provides a platform for new and established bands by allowing them to play live sessions.
6 Music also provides some of the most entertaining listening, from the glorious Adam & Joe (sadly, currently on a break: let's hope there is still a station for them to come back to...), to the sublime Huey Morgan (who broadcasts live rather than pre-records (by the way: have you heard the FLC's latest song? Delicious!) via the literary-doused Jarvis Cocker, just north of the original Blue Peter bad boy, Richard 'Love the show!' Bacon, side-stepping to the beautiful, intelligent and wry Lauren Laverne (who has, herself, partaken of some rather fabulous musical melanges herself: Kenickie and me and Mr yump's wedding song) and and and: oh it's all so damn good! Seriously, why aren't you listening to it now?!

Wit, wisdom, warmth and wicked tunes (and no adverts): please, tell me where else I can find this mix?!


Here are a few of my favourite tracks that I doubt I would have heard had it not been for my beloved 6 Music (please note, it's not all new, just good!):

Please BBC: leave 6 Music alone. It is the best thing you have ever created, and that is truly saying something.
(Don't forget to have your say.)
Posted by yumptatious at 23:13