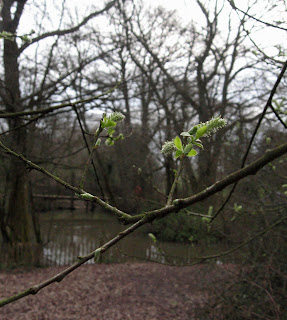 So, after my initial encouraging noises to Mr Yump's suggestion of a couple of night's away with the family, camping in a highly rated campsite, I was suddenly silenced as the waves of reality crashed into my mind:
a) this is England and
b) this is Easter
However, as half the cost had to be paid upfront, it was too late to stop it: I am not in the habit of wasting money (unless it is over exuberant shoes...or cd's where only one song is listenable...or craft books) so off we went to the wilds of Sussex, a whole hour away. 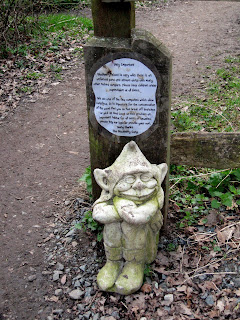 Blackberry Wood is something magical, a relaxed wooded haven, away from the self-perpetuated stresses of our modern electronic lives: it provides the luxury of having one's own wooded space, a glade of one's own. Not only that, it is one of the very few campsites that allows campfires. Each pitch has its own fire pit, with logs, kindling and a very marvellous coal available on site. Cars are kept in the car park, which at first is annoying when setting up and pulling down camp, but is actually a fabulous idea: no cars coming and going at stupid times of the day. Therefore, a more rustic method is used to transport the wealth of camping ephemera: 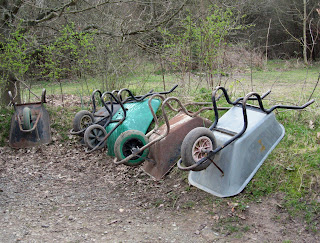 We stayed in Bramble Hide, a clearing encased in a canopy of branches heavy with fresh buds.We strung up the obligatory bunting and regretted not shoe-horning in a crate of tealight lanterns that would have turned our little patch of woodland into nature's own Vegas. Mother Nature, however, likes a decorative flourish and threw enough stars into the Eostre sky to render Ikea's candle-housing obsolete. 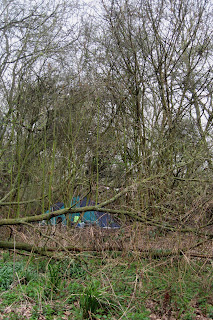 The pitches are remote enough to be private yet close enough not to feel isolated. Indeed it was lovely to look around at night and see the welcoming glow of our neighbours' fires. 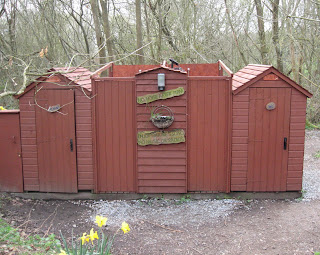 The facilities are extremely basic but clean and functional. There is a shower, which costs 20p, and doesn't have a roof. However, one of the benefits of camping before the hot weather starts is that you are unlikely to be working up a sweat (well, I suppose it depends on your camping companion and your reason for being there in the first place) and  a swift going over with a cold flannel (or an organic wet wipe) each morning should suffice. 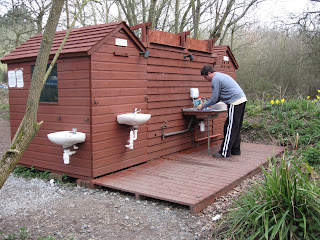 There is hot water to clean those fire-burnished pans but it comes in the form of an electric shower unit dispersing hot, but fluffy water with which to tickle the dirt away. (do take your own scouring pads)
The toilet does flush and had an abundant supply of soft toilet roll.

The site specifies that no music is allowed other than nature's own radio and it is a 24 hour station, at it's liveliest at dawn. I hadn't realised that it is like chinese whispers: one bird sings a tune which is repeated by another, who adds his own flourish. Bird #1 then comes up with another song which is again repeated, and embellished, by bird #2, and so it continues. Then the other birds do their own versions of this very polite and civilised morning greeting, until the air is full of birdsong, each one fighting for attention through the engulfing fractured chorus. It's all very beautiful and stirring but quite frankly unneccesary at 4.30 in the morning. Throughout the day, those glorified chickens, pheasants, strut through the woodland with purpose and authority, the females following meekily. They holler, they fight like Colin Firth and Hugh Grant but, at the end of the day, it's refreshing to see them alive and vain rather than squished on the roadside on a many-bended country lane.

I like the basic aspect of camping: it all goes quite 'early man', when all that matters is keeping the fire going, finding something to eat (though not neccesarily hunting and killing it), cooking it and staying warm. (picking nits out of each others hair is optional: depends just how neanderthal you wish to get.) To live a life based around eating, drinking and stoking fires is luxury indeed and surely something to aspire to. Without meaning to sound like a complete hippy (and it might help to bear in  mind that I am typing this on a laptop with the sound of trains coming into the station and the continual thrum of the nearest A-road in the background) but we need to stop once in a while and soak up the outdoors, release ourselves from the shackles of routine (albeit by setting up a new one) and pay attention to the wind running through the branches, the industrious tapping of the woodpecker, the hooting of a hungry owl, the drooling of a rabid beast intent on feasting on human flesh. It is certainly a place that draws you in and asks you to investigate: 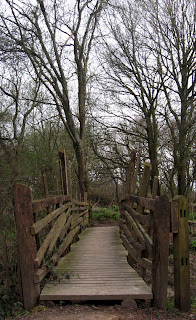 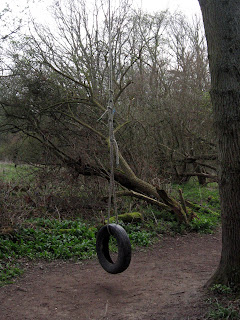 via the tyre swing 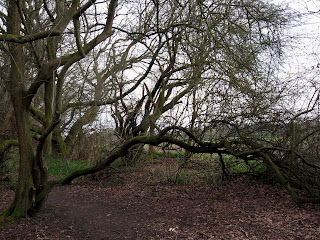 past the swooning trunk 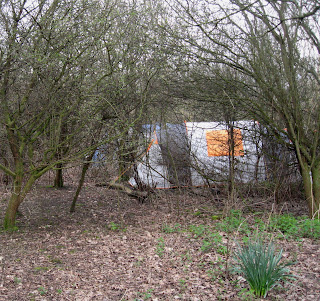 tiptoeing past the sleepy campers 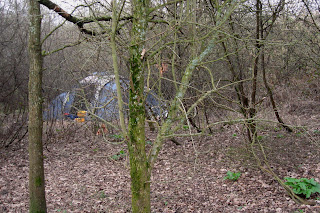 ...and stomping past the not-so-sleepy campers 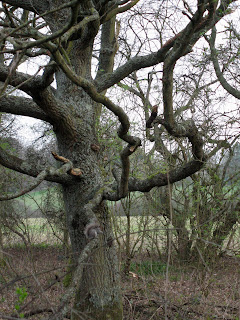 snarling at the gnarly tree
...and back to put the kettle on.
The trip was seemingly sponsored by marshmallows, in particular marshmallows on skewers aflame, eaten whilst warm with a burnished crust (tasting of candyfloss) which we lovingly named 'Flaming Death' in honour of PT Flea's ill-advised circus finale, or squished, straight from the fire, betwixt two chocolate digestives. Luckily we packed our toothbrushes. In fact, we skewered many things, including hot cross buns (success) and grapes (unsuccessful) We also cooked popcorn in tinfoil which was going well in smaller batches before we set a larger batch on fire accidentally, thus making more charcoal. 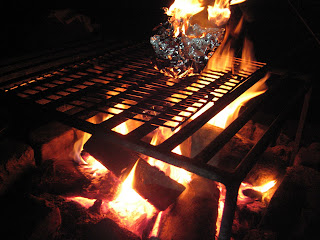 Look how it burns!

Many lessons were learnt: 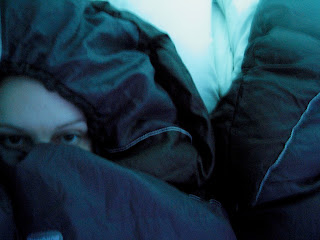 Whilst I would love to embrace the whole sheepskin rugs and duvet glamping approach, pod-size and car logisitcs dictates that we must use sleeping bags. I have added them to my list of things I would like to torch when my hormones finally get the better of me. 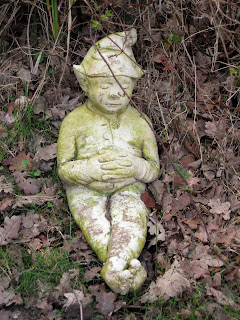 Now go hug a tree...or have a snoozle against one

Emma, I love the way you write. I am so with you on the evils of the sleeping bag. I hate that 2am stuck sausage event when I realise I need the loo but my arms and legs are all tangled round each other. I think we will definitely try Blackberry Wood, but maybe in a couple of months time. When the weather is warmer. Shower with no roof.... ARGH!!!

I've just discovered your blog via your piece in the UK Handmade magazine and realised why your name sounded familiar - our kids go to the same school! Small world! Sounds like you had great fun on your camping break
Rachel x

Cara: bless you, my child :-x
After the first night, I pulled a muscle in my shoulder from being trussed up in my sleeping bag: at least I was able to lift my mug. Definitely try it: I bet it's spectacular in the summer. (they do fill up very quickly, unsurprisingly)
Rachel: yay! Another crafty soul nearby: tis indeed a small world :-) I forgot they use my name on the mag: oops!

Reminded me of a campsite I visited last year in Devon - Hole Station. Definately recommend. Proceeds from the campsite are used to fund the management of the woodland.

I am now worried for all sleeping bags. In the chilly times I wear lots of clothes so I don't have to be tied in tight to the bag, I do like a bit of movement. I took my mum to Cornwall in March camping - she did nearly die of cold during the night, but we were saved by gloriously lovely sunny weather in the day time. So I salute you all.

I'm not kajooling (is that the word I mean) in any way, but your writing is a dream and a joy to read. I'm not saying that cos you're my BF or that I love you and camping with utter muchness, it just is. Do with that what you will.

I loved the bit about the birds, if you can ever vist us, the birds in the garden here kind of do the same thing, which always makes me smile in a strange 'hurrah I'm still in bed' kind of way.

Glad you had a good time, I'll try and deliver an equally (no chance really) entertaining capture of our next camping trip - coming up soon - also out of season for us!

hi Em, great post! question for you, understanding that the answer is totally subjective and not open for discussion, just a point of interest. What is the optimum number of days for camping, bearing in mind you want to be looking forward to going home?
all the best


And yes Im blogging again. Like Glamping... only with a laptop and a sheepskin merkin.